If you are like most people when you think about eye diseases the first two that probably come to mind are cataracts and glaucoma. There is one eye condition that affects more people than cataracts and glaucoma combined. Macular degeneration affects approximately 10 million people in the United States and is the most predominant reason people lose their vision. 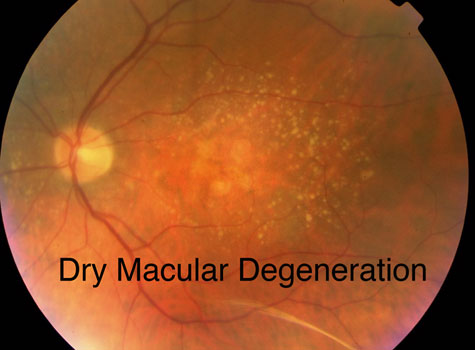 There are several varieties of macular degeneration, however, the two most common types are wet and dry AMD. The wet variety is also known as exudative and it is responsible for approximately 10 to 15 percent of all cases of AMD. Dry AMD is also known as atrophic or non-exudative and it accounts for 85 to 90 percent of AMD cases. The third type of macular degeneration is genetic, and is generally found in children. The disease can sneak up on you gradually over time. This is why regular exams with an optometrist are so important. The damage caused by AMD is not reversible and the disease will only get progressively worsen without treatment. There is no known cure for macular degeneration at this time.

Risk Factors and Other Variables

Most people associate macular degeneration with the aging process, but the disease can manifest itself at any age. There are several risk factors associated with the disease. People who smoke are two times more likely to develop AMD in their lifetimes. It is important to note that nicotine is a vasoconstrictor, which means it decreases the supply of blood to your eyes. Race is a factor when it comes to AMD, as African Americans and Hispanics are more likely to develop AMD than people who belong to other ethnic groups. Gender also plays a role in the development and onset of AMD. Women in the United States tend to outlive their male counterparts, which makes them more likely to develop the disease.

Let Us Help You Keep Your Eyes Healthy

The entire optometry team here at Olson Optical is dedicated to making sure we do everything we can to help people protect and maintain their vision. Dr. Forstrom recommends people have a comprehensive eye exam at least once a year. To learn more about macular degeneration and what you can do to protect your eyesight, give us a call at (507) 375-2020 today.